Dedicated to the life and music of singer/songwriter Judy Mayhan 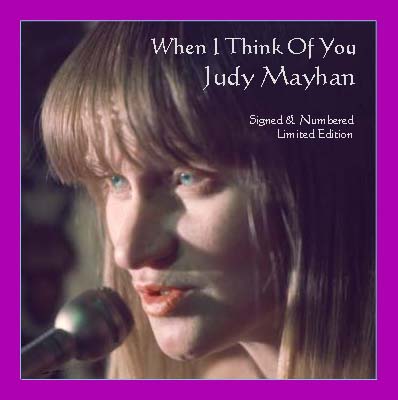 When I Think Of You

When I Think Of You was released in 2004 as a special, signed and numbered limited edition CD with a deluxe sixteen page booklet containing lyrics and Judy's notes for each song, plus photos and sketches. With the limited edition long since sold out, the open edition with a four page booklet is currently available. You can still read or print out the deluxe booklet as an Adobe Acrobat PDF file from the link below. All CDs sold by Shayomi are personally signed by Judy Mayhan.

When I Think of You is the first in a planned series of retrospective albums compiled from unreleased recordings of Judy at the peak of her musical  powers. The majority of the tracks were recorded at Tonto Studios in Los Angeles in 1979, and the rest were recorded live in 1977 at Great American Music Hall in San Francisco. Judy sings and accompanies herself on grand piano, with minimal bass accompaniment on the G.A.M.H. tracks. Judy performs an eclectic mix of song styles including  four of her own compositions plus country, folk and jazz ballads.

After a 26-year career as a singer, musician and recording artist, health issues caused Judy to stop performing in 1986. Fortunately for her many fans the world over, Judy has an archive of recordings that preserve some of her best performances. When I Think Of You may well be Judy's best album ever.

"Judy is one of my all time favorite singer-songwriters and the most gifted vocalist of all of them."
— Stephen Hill, host of Hearts of Space syndicated radio program.

View the complete 16 page deluxe CD booklet here:
CD Booklet for When I Think Of You  (272 KB Adobe Acrobat PDF file; requires Acrobat Reader 5 or later to view)
A new window should open for the Acrobat viewer, and while it loads you can continue reading here. You can print out the booklet or save the file on your computer after it finishes downloading.

About Judy Mayhan
(from the CD booklet for Rockin' the Cradle)

Judy was born and raised in the Midwest, where she studied classical piano and voice, ultimately majoring in Voice/Theatre at the University of Kansas. In 1960 she hitch-hiked to New York City with a beat-up $50 guitar and $100 in her pocket, determined to explore the possibilities of a career in music and/or theatre. She found a job in a sandal-making shop and fell into the beginning of the folk music scene in Greenwich Village.

The legendary Dave Van Ronk befriended Judy and introduced her to the Appalachian mountain dulcimer, saying it would go well with her lyric soprano voice. Dave helped her find gigs, the very first as opening act for him. Between the Sunday afternoon happenings at Sheridan Square Park and hootenannies in places like The Gaslight Coffeehouse and Gerde’s Folk City, Judy honed her talents along with contemporaries like Bob Dylan, Hoyt Axton, Buffy Sainte-Marie, Bob Gibson, Ramblin’ Jack Elliot, Peter, Paul and Mary and countless others.

By 1962 Judy had made her way cross-country with Hoyt Axton, performing in the folk scenes of San Francisco and Los Angeles, including the Troubadour, where she was offered this first album opportunity. After the album release, she appeared on the Steve Allen TV variety show. Her clear soprano voice and sensitivity to the deeper meaning of a song became well known in folk music circles.

Not one to be pigeonholed in a single genre, and influenced by all kinds of music, Judy  went on to record two popular albums for Atco/Atlantic (Moments in 1970) and Decca (Judy Mayhan in 1971), both now digitally remastered and available on CD from Shayomi. They include her first original songs as well as covers penned by peers such as Lowell George and Fred Neil. During the ’70s and ’80s Judy continued to mature and grow, turning to jazz vocals and building a following of devoted fans.

Coming soon from Shayomi are CDs of the best of Judy’s live jazz performances at clubs and concerts in Northern California, where she has made her home for the past three decades.

(End of excerpt from CD booklet)

You may be able to buy used copies of Judy's LP albums from used record dealers. However, the CD reissues available below are a better deal in terms of sound quality.

Note: At this time we are not taking any new orders for CDs, either on this website or by mail. Hopefully we will resume order taking at some point in the future. Please check this site for updates. If you would like to be notified when CDs are available again please click here and then send the resulting email.

Each CD is personally signed by Judy, and each one is essentially hand made, including color jewel box inserts for When I Think Of You, Moments and See Here, and a four-page black and white insert for Rockin' the Cradle.

A little Northern California label has reissued a lost treasure of a record released in 1971. Judy Mayhan recorded three major label albums in the late '60s and early '70s before she disappeared. Discovered first by Atlantic Record's Ahmet Ertegun, her exquisite voice brings forth, on this 1971 Decca recording produced by Nik Venet, recording gems written by the likes of Randy Newman, Lowell George, Fred Neil, and Dory Previn. But where her beautiful voice — with an emotional range that arches from an angel's sweetness to the down and dirty sadness of a lost hobo — really shines when she sings her own compositions. "See Here" and "Freest Fancy" are as sonically viable today as anything you might hear on any of the best Americana or triple A stations in the country today. A Heartfelt thank you to the folks at Shayomi Productions in Mendocino, California. (www.judymayhan.com)

Note: All links open in a new browser window; close the new window to return here.

The Best In Music for 2001 list includes Shayomi's CD reissue of See Here in the reviewer's Top 25 CDs of 2001 list along with Bob Dylan, Rodney Crowell and Yoko Ono. (Note that the site has recently folded, so the link is to our copy.)

Other websites of interest

Karen Harvey is a musician and artist who now lives in Salema, a fishing village on southwest coast of Portugal.

If you have a website please consider adding a link to www.judymayhan.com

Please bookmark this site and come back to see the additions we have planned, including photos, interviews, reviews, articles, and sound samples. If you have copies of articles or reviews about Judy or her music, please contact the webmaster at the address above.

Please visit the Guest Book Page to let us and other visitors know you've been here and leave a comment, or to read comments left by others.

Please use the Tell-A-Friend button below to let your friends know about this new site. If you don't see the button below, you probably don't have Javascript enabled, or you may be using Naviscope or similar ad filtering proxy.

for a larger view